Showing posts from 2018
Show all

Chris Wootton 385 Final Portfolio Project Introduction This project is to explore and create a piece of software focused on fun. This video game is made in the Unity Game Development engine in order to rapidly iterate new ideas for testing. The game, titled "Be The Ball" centers around directly controlling a bouncy ball into target areas. I was directly i nspired by arcade skeeball, the popular video game  "Marble Madness", and direct feedback from my own children on what physical toys they like to play with most. First Iteration Video Demo: It was a bit of a challenge learning unity from scratch, but over time I would learn more and more techniques for getting the game to behave the way I intended. Physical Prototype Revisions and additions (the orange pad is extra bouncy!) were made. Contextual Inquiry A big part of my design was fine-tuning the physics elements of gravity, bounciness, and top speed of the ball
Post a Comment
Read more

Smart Lock Security Company, Dark Pattern in Action Introduction The premise of this assignment is to use a dark pattern, a purposeful design that inherently coerce the user to do something they normally wouldn’t do. A good quick example is how after downloading an application, the installation wizard has an “opt out” checkbox to NOT receive emails. The dark pattern here causes the user to do extra work in order not receive emails, and therefore more people will be subscribed than if there was a checkbox to receive emails. We decided to create a faux-security company named Smart Lock to demonstrate a close-to real world example of a dark pattern. Smart Lock is a security company that primarily produces locks for doors, devices and other entrances linked up with secure “key cards” that allow users to be sure. Smart Lock’s main goal is to keep its customers safe. Secondary goals include, convenience for proprietors (vendors of Smart Lock) and a “backdoor authentication” f
Post a Comment
Read more

Group 5 Chris Wootton Alexander Elkins Spencer Perry Ian Davidson  For this design sprint, we created a game in Unity in which the player controls a skeeball and guides it towards some floating targets. The difficulty stems from the need for momentum, control of speed and direction prove crucial to getting through the target rings. VIDEO DEMO: As computer science students we are primarily taught skills in and around programming. Throughout classes we have been introduced and expected to do some design work before going ahead and implementing code. With that being said, the process we go through for each design sprint allows us to spend more time discussing how exactly we want our project to go. This means we had time to learn the Unity game engine, and listening to lectures on the characteristics of a simple interactive game before starting to work on our project.   If the game we created had been made without the context of this class, where we went straig
Post a Comment
Read more

Where We Started We had a crowd-sourcing idea about how to give users the ability to have an impact on an AI portion of a video game. The part of the game we wanted to focus on was computer assistants or other non-player controlled characters to have growth with feedback from users and data mining. Ideas about having a BuddyBot AI while playing online multiplayer Battle Royal games (like PUBG) to help the users fill extra slots on their teams with a teammate that wasn’t just a worthless meat shield. With observing play styles and having user feedback in the form of surveys, updates to the BuddyBot system will advance the program to a threshold that users will accept that the BuddyBot is just like inviting your friend to play. Future Ideas Taking BuddyBot from the multiplayer experience and into single player games that have companions while adventuring will also improve user experience. With many people playing the games and crowd-sourcing information to nit pick the feat
Post a Comment
Read more

September 25, 2018
After reading a bit about crowdsourcing, I expect any task I find will be something that is difficult or imprecise if left to an algorithm or program, but is doable for people. It could be some subjective analysis as well, such as opinions on what looks or sounds good. One thing that may be difficult is to game-ify the task to keep it interesting and attract more participants, because effective incentives are always tricky to master. For this exercise, I partook in the Galaxy Zoo Project on zooinverse. In this task, I was given a photo of a galaxy and given several very specific questions regarding the shape and features of the galaxy. This was not difficult at all, and I am certain my 7 year old son could recognize and complete this task just as easily. I initially thought it might be more difficult, but it seems this is a task that people are good at but for computers it is difficult to discern the subtleties in images. This task was for  research in cataloging galaxies and did no
Post a Comment
Read more

Design Sprint: Dark Patterns Group 7 Link to the web sign-up form: http://cs.sonoma.edu/~idavidson/cs385HCI/form.html The Smart Lock is a company that has locks for doors, devices and other entrances linked up with secure Key cards that allow users to be sure that whatever is behind the smart lock is secure and safe. Starting out, apartment managers or people that want to have their doors linked up with new smart locks can have install these new locks and provide the sign up forums needed to issue out the smart key cards. Apartment managers will be able to provide renters that their building is more secure and safe because of our new smart locks, also providing that the renter can ask for more of their devices can be protected by the smart key card by going to our web page for more information. The dark pattern is in the forum given to the person applying to rent, and will be crucial for them filling out the information so that they can use the doors of the apartment.
Post a Comment
Read more 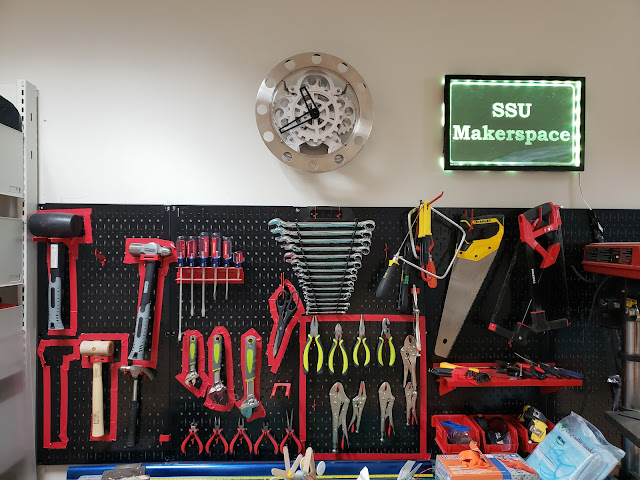 The example of good design that I saw on campus is the workbench in the SSU Makerspace. I love the Makerspace. I went in almost every day last semester to design and iterate models to 3D print, solder some boards, or sew my backpack straps back on. The workbench is a thing of beauty, a tinkerer's shrine. Not only do they have a wonderful assortment of tools not normally accessible to college students, but everything has it's own rightful place upon the wall. There is no lurking anxiety that you may be doing something wrong. There is no countless hours searching for that one thingamabob or "like this but smaller".Very rarely are we able to feel that all is right with the world, but at least we can rejoice in the knowledge that while we are working at the bench, our immediate surroundings are perfectly in sync.
Post a Comment
Read more

Here is an example of bad design that gets worse the more you look at it. First off, I applaud the school for attempting to separate the recycling from the garbage destined for the landfill. That said, we are trained to visually associate a blue or green bin with recycling and a black bin with garbage. These bins are all gray with small blue font. People on campus with something to throw away usually glance at the bins several milliseconds before deciding which one to use, and looking into these bins you can see the evidence that most people chose incorrectly. If you look at the lids, you will also see that the long, flat lid on the bin for cans and bottles cannot possibly accommodate a bottle or can of any size and the bin for mixed paper contains the most cans and bottles of the three. For me, the very worst part of this setup is that I noticed the problem two years ago, I brought it to the attention of the school's environmental council last year, and somebody is out th
Post a Comment
Read more 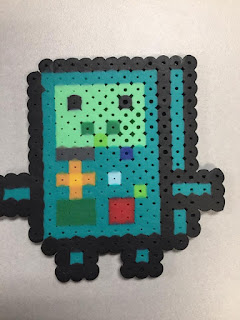 I was asked to show off some of my perler pixel artwork, so here it is!
Post a Comment
Read more

One Month of Flute: Progress So Far

June 24, 2018
After playing and practicing an hour a day for one month, I decided now would be a good time to give some initial thoughts and suggestions for anybody else considering taking up the instrument. First of all, I need to address the importance of posture.After playing for an hour a day for just the first two days, I got a really bad pain in my left shoulder, back, and side of my neck. I did not immediately connect the pain with my flute playing but eventually realized how holding up the flute used muscles I was not engaging regularly.The pain was from the expansion of muscles that pressed on a nerve. I experimented with some sitting posture with my flute and found that there is a huge difference if I use correct posture, more specifically putting my legs towards the right instead of straight in front of me. Although the flute is not really heavy, holding it up for long periods of time may cause some pain. I thought this was important enough to share in case anybody decided to practice 4 h
Post a Comment
Read more

FlutePunk: How I Learned to Stop Worrying and Love the Boehm 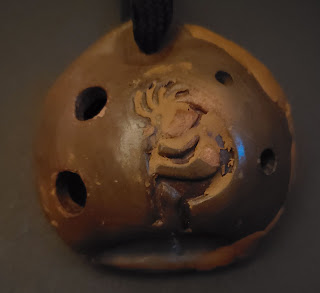 When I was a teenager, I bought a 5 hole ocarina from Songbird Ocarina . I was a big fan of Ocarina of Time, of course, and I had a budding interest in playing music. I did not have the opportunity to participate in school band, because my tiny school did not have a music program after the band director quit. I wanted to play the flute but was a bit intimidated by the key system in concert flutes, plus there was the issue of who would teach me, how would I afford it, and the classical band scene seemed too pretentious anyway, right? So instead of begging my parents to invest hundreds of dollars they did not have available, I bought the $20 ocarina with a range of one octave (12 notes were more than enough to challenge me). My original ocarina. It was repaired with sugru after a nasty fall. I had a lot of fun with that ocarina. I played Zelda songs, obviously, as well as Christmas songs, anime theme songs, and popular melodies to anyone who wanted to hear them. After a few month
Post a Comment
Read more
More posts